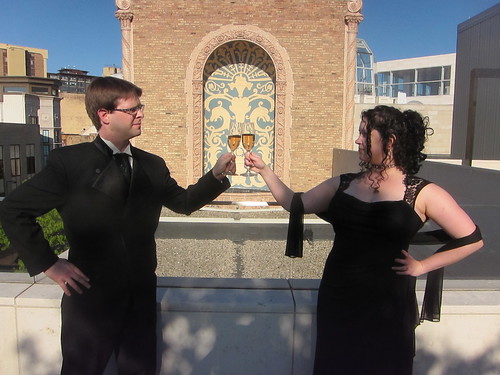 I went and got married. It's been over a year and I can now say the words "wife" and "husband" without irony or disbelief (mostly).

I like marriage! I wasn't going anywhere without Jesse anyway, and we've each had a chance to put the other on our health insurance, which is the primary point of American marriage.

I live in Oakland, California now and work in Berkeley. I am in San Francisco weekly.

It's pretty much the best thing ever.

You can purchase songs featuring my voice from iTunes.

This is not an advertisement. I'm merely pointing out an amazing thing.

(I haven't listened to the Z-Town: The Zombie Musical Original Cast Recording all the way through, actually; I'm ferociously shy about watching/listening to myself perform.)

I once made a habit of listing my annual reading here, but I see I neglected to post 2010's reading list. I'm talking about books over on Google+ today and thought I'd return to this old habit.


2011's list is fat and growing-- 94 books so far! It's been a good year for books, and setting up a comfy little reading nook in the master bedroom helped, too.

Z-Town: The Zombie Musical opens Friday. Today I have come down with a cold/sinus infection/infectiony hay fever/something. This is less than ideal. But if there's one thing being a Tom Waits fan has taught me, it's that gravel in my voice doesn't preclude a good performance.

No good you say?
Well, that's good enough for me.
You're the same kind of bad as me.

Geekesque Burlesque was grand. Not only because my partner brainstorms and implements events like that, not only because I can gaze upon maginificent performers breathing life into great geeky numbers, but because I get to perform. Meghan and I kicked off the show with an cover of Ookla the Mok's "Stop Talking About Comic Books or I'll Kill You." We were dressed as Rogue and zombified Zatanna. (She called Rogue first so what could I do? Zatanna it was, then.)

Why zombified, besides the obvious? Because I later performed in a number from Z-Town: The Zombie Musical.

Five nights a week I rehearse for Z-Town. I've loved the script since it was in its relative infancy, and was honored to be a part of script-workshopping read-throughs before it got officially picked up for staging. It'll run at the Bartell from September 30-October 15, and you should go buy tickets for a performance of your choice. Even if you live elsewhere and cannot possibly attend.

Unrelated to performances: Jesse and I actuallly toured a home for sale this past week. I-- of the crisis-level aversion to commiting to real estate-- fell in like with a house that my co-worker described as the Addams Family manse. Alas, it's a creepy  French empire pile from the outside but full of remodeled contemporary angles on the inside. Those upgrades drive up the price and leave me emotionally cold. I do not love a clean modern angle, no indeed. But it's been interesting to note my unanticiopated step into "I could buy a house" adulthood.

I'm updating here because now all the spambots will target this post and not my weeping post about Beeper's death. Spam on that post is adding insult to injury. (I adopted another cat to ease the pain of Beeper's loss. The new cat's name is Raimi. He's the best.) 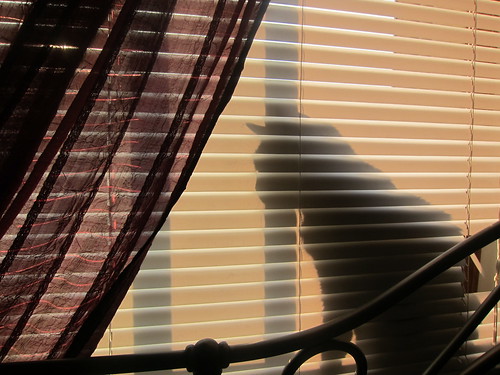 Beeper is dying. Nine months ago I learned he had chronic kidney failure but nobody told HIM so he kept purring along, happy and loving and imperious as ever. But today he's actively dying, he's miserable, he's so, so ill and in pain. I think he'll have to hold on until tomorrow because today's a damned holiday and the vet won't come. Beeper is vomiting again beside me as I write this, and staggering around on legs that barely work. It's horrible. This is hell. This is the best cat in the world dying and I want to die too.

Edit: That's a little melodramatic; I am not going to die over this heartache. I will just hurt. Hey, two of my first LJ posts ever, back in 2002, were about Beeper. My family adopted him and his sister Asherah around 1996, and when I graduated college and moved into an apartment I claimed Beeper for my own (not without some adjustment difficulties, fixed when I stole Beethoven from the familial homestead, too). I've always been very proud of Beeper as my model cat-- this photo has graced a Canadian article about books and cats, and has also appeared on Lifehacker Japan several times. He's an international model! The world loves Beeper! 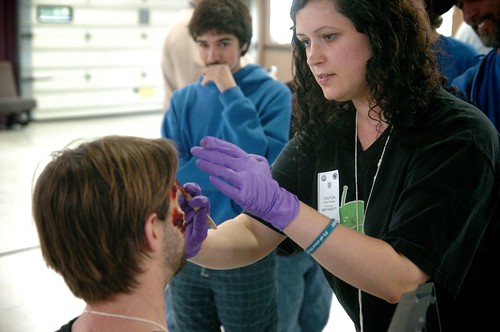 This is me, concentrating, watched by a Boy Scout troupe and other onlookers, painting wounds on my boyfriend with am Army Reserve EMT's moulage kit. What you cannot see is the pure hyperpowered delight going at full speed inside me.

Look how beautifully wounded Jesse got! 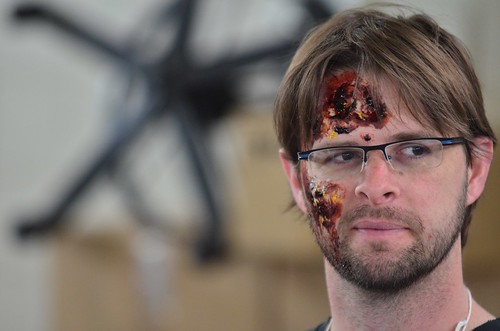 Is it my best work? Nah. But for surprise moulage volunteer work with someone else's materials, I consider it distinctly Not Too Shabby.

You might guess there's a story behind it, and this is that story: we volunteered for the Dane County Regional Airport's Full Scale Emergency Exercise. I yanked us out of bed at 4:30am because only the first 75 volunteers would get to be victims with moulage (makeup wounds), and bloody victimhood suited my interests exactly. Early birding the day won us the moulage worm as we drew victim tickets. Off we headed to the Air National Guard gymnasium for blood.

I shouldn't revel that they were understaffed, but oh, when they asked if anyone had moulage experience, I was so excited and nervous and thrilled. Have I not worked with wax and fake blood once or twice in my time? Are there any zombie skills that do not relate to acting out a hypothetical plane crash? I raised my hand and was given a station. The next hour was a bright bloody blur as I glued appliances, dripped blood, and painted bone on a dozen or so other volunteers. Ladies and gentlemen, I had the time of my life. 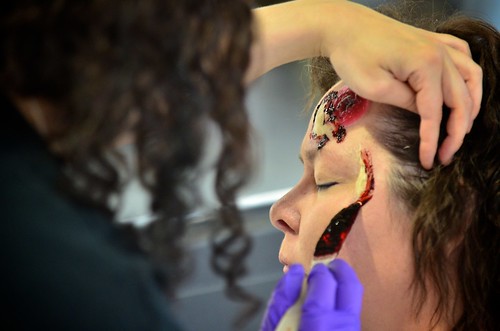 I lucked out even further when everyone else was done and it was time for my own makeup. Steve, a Stoughton EMT, does moulage for hunting training sessions twice a year and knows his way around a bottle of liquid latex. He brought his own supplies (mostly stuff from Mallatt's, I was pleased to learn) and helped me with my victim card's direction of "multiple FX femur and tibia." Why, I even had a tube wrapped around my thigh leading to a syringe stored handily in my waistband-- when I needed extra blood, I simply depressed the plunger and watched my wound ooze! Look how I seem almost afraid of my own awesome injury:

We, the victims, lay self-strewn across the tarmac. I'm front left. Do not mock my "woe is me" pose. I'm not over-acting; it was just bright. The shot of Jesse is, I think, a marvelous one. 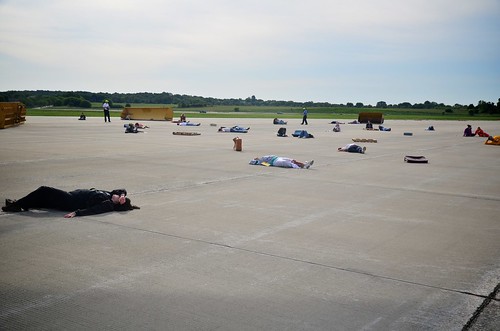 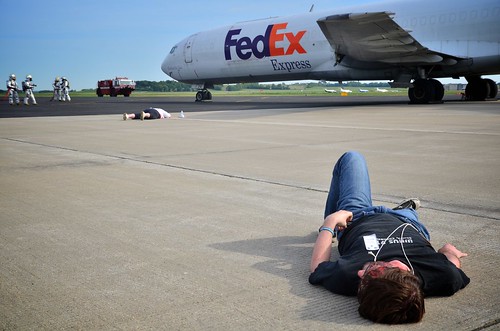 Then we were rescued. Jesse and I were badly wounded, so we got the full treatment: C-collars, strapped to boards, wheeled into ambulances, and eventually bussed to the hospital where the emergency departments were part of the disaster training scenario. I couldn't count the participants: there were ambulances, firemen, and police from nearly ever Dane County community I'd heard of, and UW Hospital's helicopter landed on the tarmac not far from me. The Army Reserve was there, the airport was heavily involved, and at least two hospitals practiced disaster triage in their ERs. It was a huge undertaking. 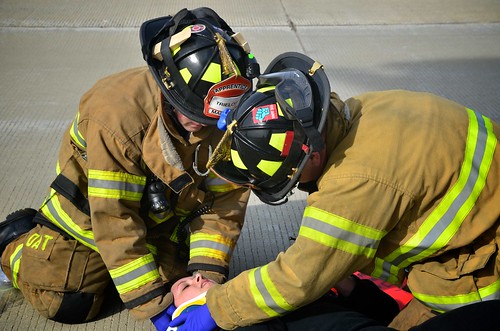 Then we all had a picnic.

It was a very good morning.

I'm tremendously inspired to know that my zombie hobby has other, more practical uses. People need moulage artists for training scenarios. I never knew! I can help people and have fun! I've connected with the EMT who did my wounds to learn more about it all.

Do you know what I did yesterday? I recorded songs for a zombie musical! There are songs out there with me singing a zombie role. The musical itself goes live in late September at a local theater; I won't be auditioning for the part I sang yesterday but I have my fingers crossed for a grand groaning comedic part.

Also? Private bellydance lessons start this week because I love dance and I get to be one of the venue dancers for Sabbat de Sade at the Inferno this month. And on Saturday there's a dance workshop! Aiyee!

Also? Next week I play a victim in our local airport's full scale emergency planning exercise. I hope I get fake wounds.

Also? The Bittercube guys are at Merchant tonight, so I'm going to drink some mighty fine and fancy cocktails with the beautiful Anna and Sarah at my side.

Also? I absconded with Jesse for Medieval Times last weekend as a surprise birthday present. Our knight won! My enthusiastic cheering and post-tournament buzz gave me a glimpse into the psychology of sports fans.

Finally, I'm somewhat into patient health advocacy and health literacy lately. My country has a labyrinthine and unjust healthcare system, and patient advocacy has always been one of my professional interests (I'm a healthcare writer by day). The health-endangering and sense-defying difficulties of a geographically distant family member hammered home how vulnerable huge swaths of the American population are. I'm investigating non-profit advocacy groups for my relative's sake and also out of a deep sense of injustice.

My favorite cocktail: equal parts Aperol, St Germain, gin (or genever), and lemon juice. Stir or shake. Serve over a cube or two of ice.

My favorite ice: funny shapes like fangs and brains and UFOs.
Collapse